The world’s most famous gorilla died 18 years ago today. I’m grateful for what he taught me while he lived.

On this day in 1992, Richard Johnstone-Scott arrived at work and made a devastating discovery. A close companion he had shared a uniquely intimate relationship with was dead– aged just 31.

It was Jambo, the adult male silverback gorilla he had looked after for several years at Jersey Zoo — an iconic ape who had changed the minds of millions of people with a few simple acts on a summer’s day in 1986.

Jambo was a Western Lowland Gorilla. IUCN’s Red List says there are now just 95,000 of his kind in the wild. To put things in perspective there are a similar number of people living on the island of Jersey and it is just nine miles by five.

Jambo was the first male gorilla born in captivity — back in 1961 — and he came to Jersey in 1972 to join and eventually dominate a captive breeding programme at Gerald Durrell‘s famous zoo.

I was born in Jersey two years later and like all children there I got to meet Jambo early on, during a day trip from primary school when I was five or six. He was already immense. At his prime some years later he weighed in at close to 200 kg of what seemed to be solid muscle. 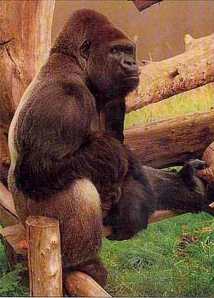 That grey hair of his really did shine like silver and we were told as kids that this meant he was the king of the castle. The female gorillas thought so too. They mothered 14 of his offspring and he was a firm and fair father to them all.

Sometimes Jambo would charge about, growl or hammer his fists against chest, which made a sound like fast beats on a bongo drum. More often though his stance, his glaring eyes — or the casual yawns that exposed his cream fangs — were enough to make it clear that he was the undisputed boss of everything, and that he knew it.

Jambo’s eyes could seem fierce as they stared out at the world like a pair of trolls that lurked beneath the thick bridge of his brow. But even as small kids — and even before his day of fame in 1986 — we sensed that Jambo was a bearer of benign power. We did not fear him. We revered him.

When Jambo was in the interior part of his home, we could look him in the eye and see that he was looking right back into ours. We saw how familiar the lines on the palms of his hands were as he pressed them against the thick shatterproof glass that separated us. He picked his nose and ate the bogies. He farted loudly and made us laugh. To children he felt like a friend, a big brother. 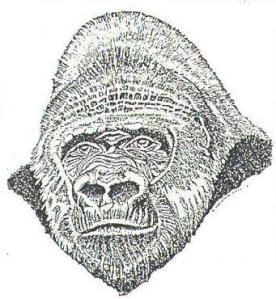 To the zoo’s founder Gerald Durrell he was, “a magnificent individual, courteous and gentle”. Durrell chose these words after Jambo taught millions of people the world over a lesson in humility on 31 August 1986.

That afternoon, a five-year old boy called Levan Merritt fell into the gorilla enclosure from the surrounding wall — a drop of four metres. He landed hard in the concrete gutter that ran along the base of the wall and was knocked unconscious.

The boy was curled up on his left side, just metres from Jambo and his family. An ominous dark pool began to spread across the concrete from his head and when Jambo ambled forwards to investigate, the onlookers shrieked.

As leader of the group, Jambo was first in line for food, first to defend his family from any threat. He moved closer and loomed over the boy, then bent his massive head down towards the boy’s face.

The crowd gasped again but Jambo simply sniffed. He moved to the side and sat staring down at the boy, then he reached out his arm and touched Levan’s back with what seemed to be the most gentle of strokes. It was an astonishing scene.

Seemingly satisfied, Jambo positioned his great bulk between the prone boy and the other gorillas, keeping them at bay. Then Levan Merrit awoke and started to move. The crowd hissed at him — “Don’t move. Stay still” — but when Levan’s screams began to tear the air like a siren, Jambo decided he had seen enough and he led his family away to the inside rooms of their complex.

A 15-year old local boy called Brian Le Lion with an early video camera had captured the whole episode, which ended with two zoo keepers keeping a younger, more boisterous male gorilla at bay while the emergency services pulled the boy to safety.

In the coming days, television news bulletins had broadcast the footage to millions of viewers worldwide — and its most enduring images, those of Jambo as the peaceful protector, showed the world that great apes are intelligent beings with much in common with ourselves, not King Kong-like creatures to be feared.

Johnstone-Scott, Jambo’s keeper at the zoo,  later wrote the following in an article about his 40-year experience of working with gorillas:

“When interacting with them the gorillas’ restraint of power has always impressed me, it’s almost as if they sense that physically they are superior, yet, although capable of great ferocity, it is not in their nature to be aggressive without good reason.”

To me Jambo seemed to embody all of the virtues that make for greatness and like many other children of my generation from Jersey, I felt immensely proud that it was ‘our Jambo’ who had protected that child that day.

Jambo’s actions on that day in 1986, and my many encounters with him and his family before and after, encouraged me to look at the world in a different way and had a big influence on the choices I have made in life.

I hope his many offspring around the world are inspiring today’s children — and adults too — and that one day we won’t need to keep gorillas in zoos because they will be secure in the wild.

8 thoughts on “What gorillas can teach children about being human”